CRESTVIEW HILLS, Ky. — Whether it’s fueling up to watch a football game or the perfect accompaniment to a cold beer, nothing beats the occasional order of chicken wings.

It’s a comfort food staple that most people are at least familiar with, but unless they’ve been to a restaurant in Northern Kentucky, they’ve never had their wings cooked with the latest technology available. of chicken wings: a robot named Lil’ Flip.

What do you want to know

When William Stone brought in “Lil Flip” to join the kitchen staff at the Wings and Rings he manages in Crestview Hills, he didn’t know how the rest of the staff would react.

“They understood it very well. They understand that it is not there to replace jobs, but it is there to increase the efficiency of the kitchen. That was the main concern when he arrived, that was the reaction from the staff, and that was nothing but positive,” Stone said.

It’s easy to see why. Lil’ Flip works long hours without pay and never complains, in addition to needing to fix the occasional technical problem.

He is also an absolute machine, literally, for churning out chicken wing after chicken wing for hungry customers.

“We are the first restaurant in the world to serve chicken wings cooked with artificial intelligence. So we’re very excited about it here in Crestview Hills, Kentucky. It’s really exciting,” Stone said. “Different concepts that I worked on, they would have different pieces of machinery, and it was like oh that’s kinda cool, that’s kinda cool. Then you come back and you see this, and you’re like, ‘ It’s really awesome.”

The robot uses nine cameras to classify items, so whether customers are a fan of traditional, boneless, or even fried fish, Lil’ Flip’s robotic arm can drop food into the appropriate basket for a searing oil bath. until it’s golden, crispy and, according to at least one dinner party, delicious. 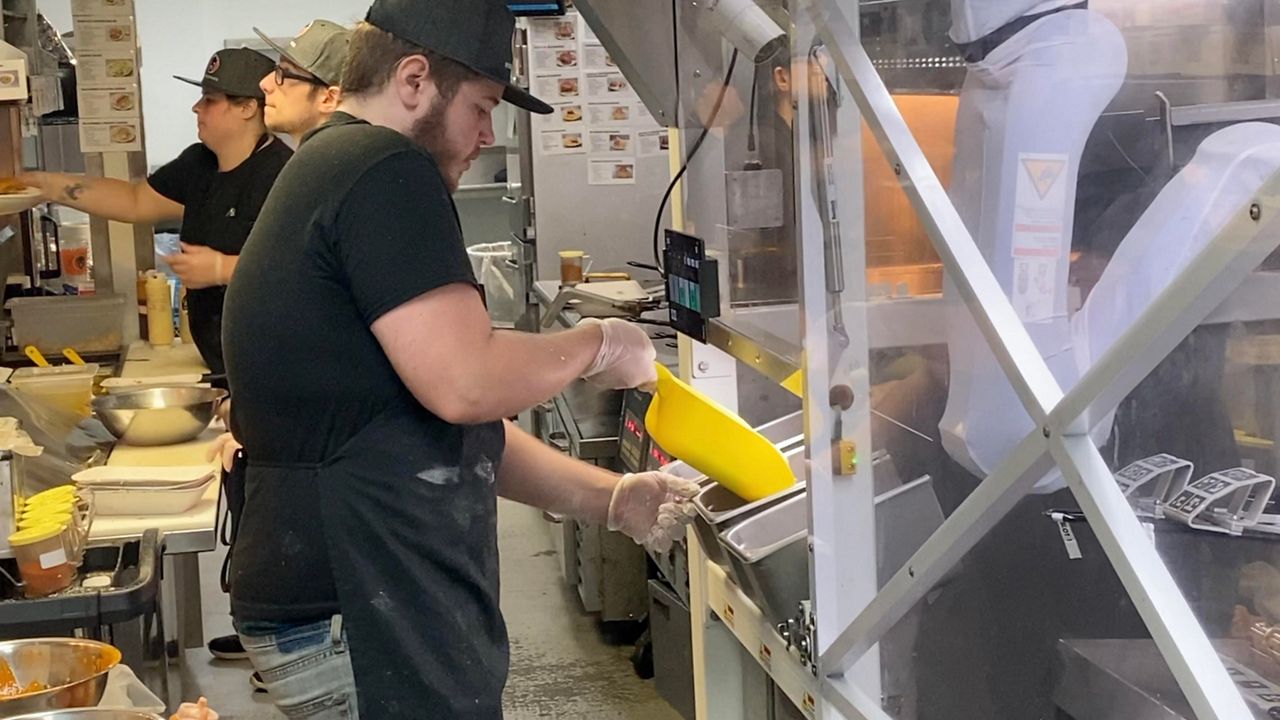 “Very delicious,” said Jessica Wylie, who was eating at Wings and Rings for the first time. “I thought it was kind of funny that he was made from a robot, so that’s really cool. I’m very impressed.”

Wings and Rings is a Cincinnati-based chain with more than 80 locations across the country that has been around since 1984. The company worked with California-based company Miso Robotics, which designs robots for the restaurant industry, to bring Lil’ Flip on board at Crestview Hills after a year and a half of testing.

The staff named it after Miso’s first hamburger flipping robot, “Flippy”. Flippy’s namesake is, appropriately for the restaurant he’s in, programmed to cook wings.

Stone said his wings and rings are in a proper place after the challenges of the pandemic. Worries about machines replacing human jobs have been around for decades, but he assured his staff that they don’t care about job security.

“In the midst of the labor crisis, does that help solve some of those efficiencies there? Absolutely. But you still need a designated person to run that machine,” he said. .

Also, Lil’ Flip can’t mix and sauce the wings. At least not yet.

Inevitable jokes about apocalyptic robot takeovers aside, Lil’ Flip certainly won’t be the last of his kind to join a kitchen staff like that at Crestview Hills Wings and Rings.

But for now, this staff is proud to say they are the first.

“We are more excited and more proud that this is the seal we can put on it. That’s what we can say is we’re the first,” Stone said.

Stone said he’s excited to see what the future holds for the robot, which he says can do even more in the kitchen.

3 knives every cook needs. And some they might just want.

Different varieties of Rajma and how to cook them correctly

You may have missed

Farmland Donates $9,000 to Nebraska FFA and Over 115,000 Servings of Protein to Heartland Food Bank

FARMLAND® DONATES $9,000 TO NEBRASKA FFA AND OVER 115,000 PROTEIN SERVINGS TO FOOD BANK FOR THE HEARTLAND

3 knives every cook needs. And some they might just want.

Different varieties of Rajma and how to cook them correctly